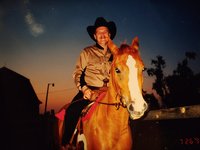 Born in Malone, NY., August 4, 1960, he was the son of the late Charles L. and Elizabeth H. Spinner Gratton. He graduated from Salmon River High School, in Fort Covington, NY., in 1979.

Many years ago Paul was employed by Tru-Stitch Footwear in Malone, NY. He later was employed by Giroux Brothers John Deere Dealership in Malone, as a Parts Manager for several years. For the past few years, he was a custodian at Salmon River Central School until the time of his death.

He was an avid horseman and showed at the local shows and fairs. He was a member of the American Paint Horse Association. He was a Franklin County 4H leader and helped cook at many of their functions. He was a communicant of St. Mary’s Church, in Fort Covington. He enjoyed fishing, working with his tractor in the field and haying. He cherished the time he spent with his friends and family.

Along with his parents and his wife, he was predeceased by four brothers, Ralph, John, Philip and James Gratton and one sister, Elaine Gratton.

Calling hours will be Saturday, January 19, 2019, from 11 a.m. until 1 p.m., at the Bruso-Desnoyers Funeral Home, in Malone, NY. A Funeral Service will be held at 1 p.m. in the funeral home chapel, with the Rev. Alfred Fish officiating. Burial will be in the old St. Mary’s Cemetery, in Fort Covington, NY., in the Spring.

Donations may be made in his memory to the local 4H groups or to the North Bangor Volunteer Fire and Rescue Department.

Arrangements are through the Bruso-Desnoyers Funeral Service, Inc. in Malone, NY.