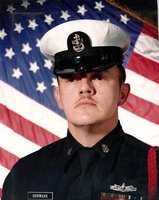 John C. Benware, Sr., 69, of Brandon, NY., passed away on Wednesday afternoon, May 29, 2019, at his home, while under the loving care of his wife, family and Hospice of the North Country, Inc.
Born in Bellmont, NY., July 9, 1949, he was the son of the late Charles and Claudia Havens Benware. He graduated from Salmon River Central School, in Fort Covington, NY.
On May 12, 1978, he was united in marriage to the former Deborah L. Walker in May Port, FL. She survives.
John served in the United States Navy from 1967 until his Honorable Discharge in 1988. He later worked as an engineer for the New York State Department of Corrections at the Franklin Correctional Facility, in Malone, NY., for eighteen years. He retired in 2010.
He was an avid Pittsburgh Steelers fan. He enjoyed fishing, building computers, being outdoors, and having coffee in the morning with his friends at Stewarts. His most cherished times were spent with friends and family, especially his grandchildren.
Along with his loving wife, Deborah, he is survived by four sons and two daughters in law, Kevin and Tracie Benware of Malone, NY., Brian Benware of Statesville, NC., John Benware, II., and his wife, Jamie of North Bangor, NY., and James Benware and his companion, Mellisa Mayville of Malone, NY., two daughters and a son-in-law, Charlotte and Jason Halaburda of Plattsburgh, NY., and Michelle Benware of Deland, FL., two sisters, Sarah “Elaine” Benware of May Port, FL., and Claudia Benware of Bombay, NY., fourteen grandchildren, one great grandson and several nieces, nephews and cousins.
Besides his parents, he was predeceased by one sister, Marie Ayers.
There are no calling hours. Funeral Services will be private and at the convenience of the family. Burial will be in the Elmwood Cemetery, in Fort Covington, NY.
Donations may be made in his memory to the American Cancer Society.
Online condolences may be made to the family at www.brusofuneralservice.com.
Arrangements are through the Bruso-Desnoyers Funeral Service, Inc. in Malone, NY.