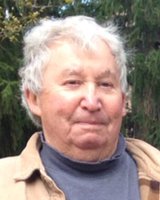 William P. “Bill” Hession, 77, of Moira, NY, passed away Monday night, December 14, 2020, at The Alice Center, in Malone, NY. Born in Derby, CT, June 11, 1943, he was the son of the late William and Katherine Donavan Hession. He graduated from High School and Brick Layers School. He was a Journeyman Brick Layer and was well known throughout the area for his talented mason skills. He enjoyed working on large projects where he could operate heavy equipment and dump trucks. Happy times were spent on his John Deere tractor and Harley Davidson Motorcycle. He enjoyed listening to George Jones and Bruce Springsteen. Bill was also a well know horseman and raised and trained many horses. Most of all he was a devoted husband and father and worked until the age of 74 to provide for his family. In March 1994, he was united in marriage to the former Chae K, in Fort Covington, NY. She survives. Along with his wife, Chae, he is survived by one son and daughter-in-law, Jordan and Keira Hession of Constable, NY, two daughters and a son-in-law, Jeanna Hession and her fiancé Daniel Badgley of Fairfax, VT, and Shona and Thomas Freeman of Hammondsport, NY, and one sister, Margaret Obidinski of New Haven, CT. There are no calling hours. A Celebration of Bill’s Life will be celebrated on a date and time to be announced . Donations may be made in his memory to the Alzheimer’s Association or to the Westville Volunteer Fire and Rescue Department. Online condolences may be made to the family at www.brusofuneralservice.com. Arrangements are through the Bruso-Desnoyers Funeral Service, Inc. in Malone, NY.