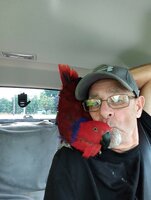 James F. “Tuck” Tucker, 56, of Constable, NY, passed away unexpectedly Monday, August 16, 2021, at his home. Born in Bethpage, NY, November 30, 1964, he was the son of James F. and Katherine A. Klaiber Healey. He was a self employed contractor for many years. He was a an avid animal lover and shared his love with his parrot and dogs. He enjoyed hunting and spending time with his friends and most importantly his family. He was a member of Narcotics Anonymous. On August 28, 2010, he was united in marriage to the former Maria A. Landry. She survives. Along with his wife, Maria, he is survived by his Mother and step father, Katherine and John Tucker of Edgewater, FL; four daughters, Kailyn and Brittany Tucker both of Schenectady, NY, Marena Reome and her fiancé Brandon Rockhill and Angel Reome all of Constable, NY; one son Andrew Kodesch of Schnectady, N.Y.; four sisters, Kim Holloman and her husband, Wesley of Panama City, FL, Barbara Janney and her husband Robert of Summerville, SC, Leslie Weiser of Griffin GA, and Colleen Luke of Clifton Park, NY. Calling hours will be Tuesday, August 24, 2021, from 4-7 pm., at the Bruso-Desnoyers Funeral Home in Malone, NY. A Funeral Service will be held at 7 pm. in the Funeral Home Chapel, with the Rev. Derek Trudell officiating. Donations may be made in his memory to Narcotics Anonymous. Online condolences may be made to the family at www.brusofuneralservice.com. Arrangements are under the care of the Bruso-Desnoyers Funeral Service, Inc. in Malone, NY.