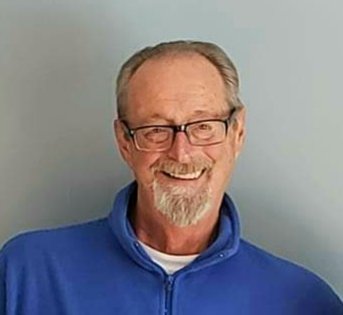 Jack Legault, 69, of Malone, NY., passed away peacefully, Thursday morning, July 4, 2019, at his home, in the arms of his loving wife, Kim. He had been in ill health and under the care of Hospice of the North Country, Inc.
Born in Massena, NY., August 11, 1949, he was the son of the late James F. and Pauline Chartrand Legault.
He served in the United States Air Force from 1968 until his Honorable Discharge in 1972.
Jack worked in retail management for more than forty five years for various local and national retail companies. He retired on his sixty fifth birthday from Harris Teeter Supermarkets, Inc. in Raleigh, NC., and they began their RV adventure that very day.
He and Kim enjoyed traveling across the United States in their motor home, “Sunny Girl” visiting forty two states, until he was diagnosed with pulmonary fibrosis in August of last year. He enjoyed playing golf and was an avid Duke basketball fan. His most precious times were spent with his family, especially his grandchildren.
On July 10, 1981, he was united in marriage to his soulmate, Karen “Kim” McKinney in Brushton, NY. She survives.
Along with his wife, Kim, he is survived by two sons and a daughter-in-law, Tyler and Caryn Legault of Malone, NY., and Christopher Legault of Apache Junction, AZ., two daughters and a son-in-law, Natascha and Chris Jock of Malone, NY., and Lisa Legault of Apache Junction, AZ., one sister and brother-in-law, Sheila and Alan Peets of Massena, NY., four grandchildren, Aidyn and Khloe Jock and Eve and Eli Legault all of Malone, NY., and several nieces, nephews and cousins
There are no calling hours. A private Celebration of his Life will be held at a later date.
Donations may be made in his memory to the Hope Lodge in Burlington, VT., or to the Alice Ballard Fund of Hospice of the North Country, Inc. in Malone,. NY.
Online condolences may be made to the family at www.brusofuneralservice.com.
Arrangements are through the Bruso-Desnoyers Funeral Service, Inc. in Malone, NY.

To send flowers to the family or plant a tree in memory of Jack Legault, please visit Tribute Store

Donations may be made in his memory to the Hope Lodge in Burlington, VT., or to the Alice Ballard Fund of Hospice of the North Country, Inc. in Malone, NY.