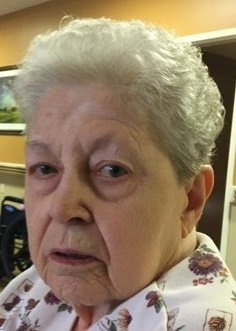 Elizabeth J. Myatt, 86, of Malone, NY., passed away Monday afternoon, July 20, 2020, at The Alice Center, in Malone, NY., with her loving family by her bedside. She had been a resident there since February 2, 2017. Born in Ogdensburg, NY., February 14, 1934, she was the daughter of the late George and Mary Foster Matthews. She graduated from Massena High School in 1952. After graduation, she was employed as a secretary at ALCOA in Massena, NY. She later enlisted in the United States Air Force during the Korean War. She was Honorably Discharged in 1954. On December 5, 1953, she was united in marriage to Nicholas Myatt of Cornwall, Ontario, Canada, in St. Joseph’s Church, in Massena, NY. After their marriage they moved to Canada. While residing in Canada for fourteen years, she was employed at the Canadian Stock Exchange in Kingston, Ontario and later as a Private Secretary at the Queen’s University in Kingston. She accompanied her husband on a military tour of duty in London, England for three years. After their return to Canada, they moved to Malone in 1967. Elizabeth was employed as a school secretary for eight years at North Franklin Educational Center, in Malone and later as a medical secretary for eight years, at the Alice Hyde Medical Center, in Malone retiring in 1991. She and Nicholas traveled extensively to forty nine states, parts of Canada and Mexico. She also enjoyed ceramics, knitting, needlepoint and refinishing furniture. She is survived by one daughter and son-in-law, Mary Ann and John Gokey of Malone, NY., one son and daughter-in-law, Nicholas and Melanie Myatt of Chasm Falls, NY., six grandchildren, Andrew Woodward of Constable, NY., Nicole Engel of Massena, NY., Michael Gokey of Malone, NY., Jason Gokey of Rome, NY., Jacqueline Miller and her husband Justin of Chasm Falls, NY., and Nicholas Thomas Myatt of Chasm Falls, NY., two sisters, Judith Boadway of Kingman, AZ., and Katherine LaBrake of Lake Titus, NY., two brothers and sisters-in-law, George and Janet Matthews, Jr. of Malone, NY., and John and Martha Matthews of Sevierville, TN. Along with her parents and her husband, she was predeceased by two brothers, Richard and Lawrence Matthews, a son-in-law, Damon Woodward, two brothers-in-law, Francis “Gay“ Boadway and Donald LaBrake and a niece, Terry Hughes. Calling hours will be Friday from Noon until 1:30 p.m. at the Bruso-Desnoyers Funeral Home, in Malone, NY. A Mass of Christian Burial will be celebrated Friday at 2 p.m., at Notre Dame Church, in Malone, NY. Burial will be in St. Helen’s Cemetery, in Chasm Falls, NY., with full Military Rites provided by the Malone American Legion Post #219. Donations may be made in her memory to the Farrar Home in Malone or to The Alice Center in Malone, NY. Online condolences may be made to the family at www.brusofuneralservice.com. Arrangements are through the Bruso-Desnoyers Funeral Service, Inc. in Malone, NY.
To send flowers to the family or plant a tree in memory of Elizabeth Myatt, please visit Tribute Store
Friday
24
July