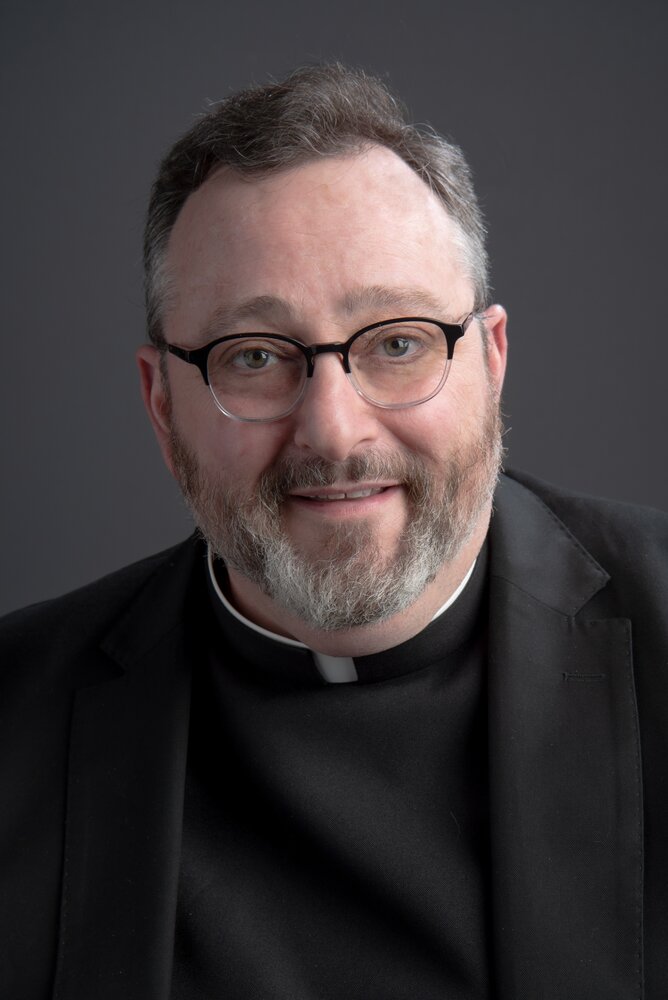 Please share a memory of Rev. Adrian to include in a keepsake book for family and friends.
View Tribute Book
Reverend Adrian Gallagher, 58, pastor of Holy Angels Church in Altona and St. Ann’s Church in Mooers Forks, died unexpectedly with the hope of eternal life on Wednesday, January 5, 2022. Born Bret Douglas Adrian Gallagher in Malone on June 8, 1963, he was the son of Douglas L. And Ellen Marie (Wallace) Gallagher. His parents survive. Reverend Monsignor Dennis J. Duprey, V.F. will preside over the reception of the body at 3 p.m. on January 10 at Notre Dame Church in Malone. Calling hours will follow until Evening Prayer at 6 p.m. led by Monsignor Duprey. Calling hours will continue from 10:30 to 11:30 a.m. on January 11 in the church. A Mass of Christian Burial will be celebrated at noon on January 11 at Notre Dame Church. Most Reverend Terry R. LaValley, bishop of the Diocese of Ogdensburg, will be the principal celebrant. Most Reverend Douglas J. Lucia of the Diocese of Syracuse and the priests of the Diocese of Ogdensburg will concelebrate. Following the Mass, burial will be in St. Joseph’s Cemetery, Malone. Father Gallagher graduated from Franklin Academy in Malone before following God’s call and entering Wadhams Hall Seminary College in 1982. After two years at the seminary, he joined the Conventual Franciscan Friars, St. Anthony Province, in Ellicott City, Maryland. He made his First Profession of Vows on August 15, 1984, and he made his Solemn Profession of Vows in the Order of Friars Minor Conventual on August 2, 1988, in Our Lady of the Angels Church in Albany, New York. During that time, he received a bachelor’s degree in Philosophy at St. Hyacinth College and Seminary in Massachusetts, and a master’s degree in Theology at DeSales School of Theology in Washington, DC. He was ordained to the priesthood July 18, 1992, in Baltimore by His Eminence, William Cardinal H. Keeler. With the friars, Father Gallagher served as parochial vicar at Mater Dolorosa Parish in Holyoke, Massachusetts, and at St. Stanislaus Basilica in Chicopee, Massachusetts; as instructor at Archbishop Curley High School in Baltimore, Maryland, and St. Francis High School in Athol Springs, New York, where he also served as campus minister; as guardian delegate at St. Hyacinth Senior Friars Residence in Chicopee, Massachusetts; and as pastor at Our Lady of Hope Church in Coal Township, Pennsylvania, and St. Patrick’s Church in Trevorton, Pennsylvania. He was also a member of the Marian Apostolate Council and the Senior Friars Commission. During his summers in western New York, Father Gallagher worked with runaways and teens battling addiction. In 2013, Father Gallagher returned to the Diocese of Ogdensburg to be closer to family. He was incardinated as a priest of the diocese on February 29, 2016. He was appointed pastor of St. Joseph’s in Mooers and St. Ann’s in Mooers Forks in 2014 and was given additional responsibilities as pastor in Altona and Sciota in 2017. In addition to his parents, Father Gallagher is survived by a sister, Amy Gallagher; brothers, Brendan and Brian Gallagher; a niece, Norah; and a nephew, Dylan. Funeral arrangements are under the care of Bruso-Desnoyers Funeral Services Inc. in Malone.
To send flowers to the family or plant a tree in memory of Rev. Adrian Gallagher, please visit Tribute Store
Monday
10
January